The Beautification Commission serves to recognize and promote the beautification of residential and commercial properties throughout Rock Island. The commission organizes several activities each year, including:

Each year, the Mayor recognizes a commercial property for best overall landscaping or exterior improvements over the past year. A presentation of a trophy to the first-place winner is done at a City Council meeting. Trophies and plaques have been awarded since 1980 to commercial properties for their efforts in improving Rock Island.

The Community Garden Certificates of Appreciation began in 2010 to recognize the City's community gardeners. Community gardens are tended by service organizations, churches, schools, families, and individuals. They are a place for citizens to grow crops for the hungry and for use in the home. These gardens have beautified otherwise vacant lots by making them productive. Eligible participants are recognized with a certificate of appreciation signed by the Mayor and the Beautification Commission Chair.

Bob Towler worked for the City of Rock Island as Chief Horticulturist for twenty-six years where he worked continually to involve community in both public and private gardens. He taught gardening classes as well as utilizing volunteers for improvement of public gardens. After retiring in 2005 he continued with his activities to beautify Rock Island for an additional sixteen years. He was a founding member of the Rock Island Horticulture Club and a founding member of the Quad City Botanical Center. He was an avid volunteer for both Living Lands and Waters and Keep Rock Island Beautiful. He was also an active member of the Rock Island Beautification Commission for sixteen years and he chaired the Commission for many of those years.

The Beautification Commission has held the annual Holiday Lighting Contest since the late 1980s to recognize beautiful and festive lighting displays throughout the City. Nominations can be taken from the public by calling 309-732-2900 or emailed at cedmail@rigov.org.

The Commission views the nominated displays during a bus tour that is held on the 2nd or 3rd Monday in December. The top three winners in the residential and commercial categories are recognized with a certificate presented by the Mayor and the Beautification Commission during a January City Council meeting.

Tell on your Neighbor Certificates of Appreciation

Each year, residents of the City are encouraged to “tell on their neighbor” by nominating the yards in their neighborhood that they find to be the most appealing or the most improved. Nominations can be made throughout the month of July and until close of business on the first Monday in August. Nominations should be emailed with address and photo to cedmail@rigov.org. In person nominations can be done at Rock Island City Hall, 1528 3rd Avenue, or taken by calling 732-2900.

Yard of the Month Award

Each month from May to August, Commissioners nominate and vote for the best-looking yard in the City. A certificate is presented to the winning homeowner, along with a wooden ribbon sign to display in their yard until the next month’s winner has been selected. A photo is also taken for the city website. Nominations for the Yard of the Month award may be submitted by calling (309) 732-2900 or by emailed with photo to cedmail@rigov.org.

SEPTEMBER 2021 Yard of the Month
The September 2021 winners are James and Patricia Adamson, for 2547 35th Avenue, Rock Island. 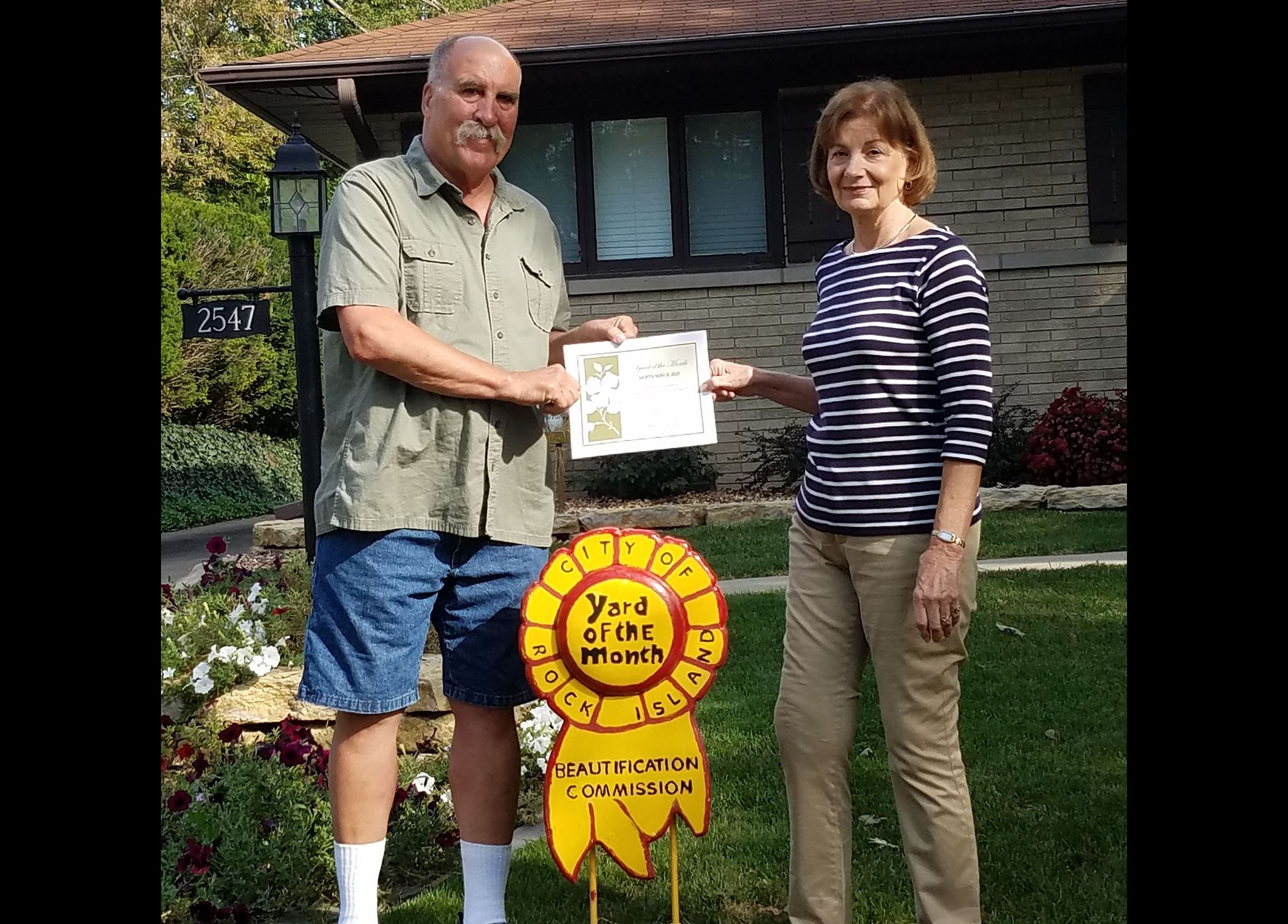 Previous Yard of the Month Winners

Visit our photo gallery to see their beautiful landscaping and all of this year's Rock Island Yards of the Month!


Agendas are available prior to the meetings.
Most Recent Agenda | View All Agendas