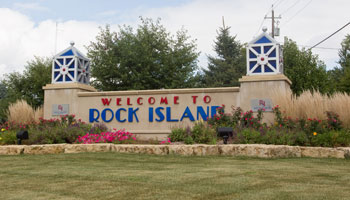 The City of Rock Island is a full-service community located on the Mississippi River, approximately 175 miles west of Chicago. Rock Island is a major city in what is known as the Quad Cities, a region with a population approaching 400,000 that encompasses Rock Island, Moline, and East Moline, Illinois, and Davenport and Bettendorf, Iowa. According to the 2010 census, Rock Island’s population is 39,018.

Organization of the City

The City is organized under a council-manager form of government, with legislative authority vested in a City Council made up of a mayor and seven aldermen. Aldermen are elected from wards to staggered four-year terms. The City is a home rule unit under the 1970 Illinois Constitution and, as such, has broad powers to support development activity in the community. Administrative functions are unified through the direction of the city manager who is appointed by the mayor and council and charged with overseeing the day-to-day operations of the City and its more than 350 full-time employees.

Learn all about what it’s like to live, play, and work in Rock Island.