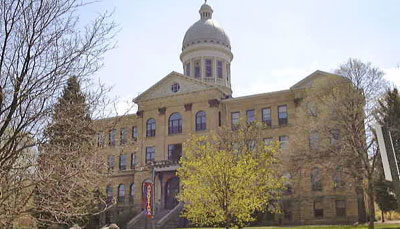 Large-scale Renaissance Revival buildings are rare in the Quad Cities and Old Main is an important example of a style popular from the 1840s to the 1920s. Dedicated in 1889, the building was based on a similar structure at Sweden’s University of Uppsala, the alma mater of many of the early Augustana College faculty. A large central pediment that appears to be held up by four two-story tall pilasters dominates the beautifully balanced main entrance. Smaller pediments flank the ends of the symmetrical structure whose walls move from heavily textured stones at ground level to smooth masonry walls at the second and third floor levels. Topping Old Main is a dome whose design derives from 16th century Italian buildings. Note the balustrade or railing around the base, the columns separating tall narrow windows and the smaller cupola also held up by columns. Old Main’s monumental symmetry visually dominates the central campus area.

Old Main is considered to be the most notable building erected by Swedish immigrants to the United States. Its primary construction material is buff-colored dolomite limestone from quarries near LeClaire, Iowa, which also produced many of the building blocks for the historic factories of the Rock Island Arsenal. Cost of the building is estimated at $75,000, one-third of which was donated by one of the community’s early commercial and industrial giants, Philander Lathrop Cable. Cable Hall, on the second floor of Old Main, was restored in 1893 to provide a glimpse of what a 19th century classroom would look like.

The most striking feature of Old Main came to be included in the project as an after-thought. The dome was not a part of initial plans conceived by architects Lawrence Gustav Hallberg of Chicago and E.S. Hammatt of Davenport. Campus legend holds that while the structure is reminiscent of its Swedish roots to the roofline, members of the building committee who considered themselves more American than Swedish demanded a dome. While Uppsala’s main building boasts a crenellated octagonal tower, a dome was believed to be more reflective of such American landmarks as capitol buildings and county courthouses.

Augustana College began a campaign to renovate the building that houses departments affiliated with the classics in 2010. Exterior renovations took place largely in 2010-11. A section of the college's website was dedicated to the project, including some rarely-seen photographs.