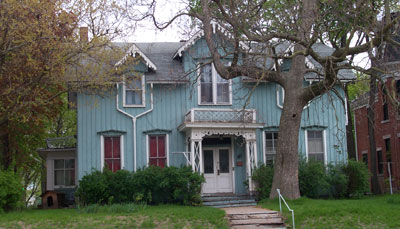 
Gothic Revival architecture is not common in this community, and this is one of only three examples known to exist. Another excellent Gothic Revival home is the Sexton’s House at Chippiannock Cemetery.

Decorative bargeboards in a pendant trefoil design adorn the gable and dormer peaks. Second story windows on the front facade extend up into the gables. The porch itself displays fanciful wooden ornamentation made possible by the scroll saw, which was a newer tool in the 1860s. The vertical board and batten siding gives this home a “Carpenter Gothic” feel. These boards cover hidden, soft brick walls, which were used for insulation.

This rare Gothic Revival style home was built for Dr. Samuel Plummer upon his return from the Civil War in 1865. In the 1890s, Dr. Plummer moved into the Second Empire home next door, and it is that house that has become traditionally known as the Plummer House. Dr. Plummer served as Medical Director of the 15th Army Corps and lost his hearing in his right ear as a result of a shell explosion at the siege of Vicksburg.

John E. Spencer, son of Roswell Spencer, a pioneer settler who came to this area in 1830, purchased this home from Dr. Plummer. His widow Mary continued to live in the home after his death.