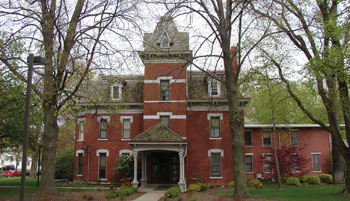 
This residence, also known as House on the Hill, was the home of Frederick E. Weyerhaeuser and his family, which included seven children. Weyerhaeuser came to the United States from Germany in 1856, and with his brother-in-law, Frederick C.A. Denkmann, founded Weyerhaeuser and Denkmann Lumber Company. Weyerhaeuser was known as the lumber master, while Denkmann was the skilled machinist. The company prospered greatly and is now known as the Weyerhaeuser Company, an international forest products company that employs 58,000 people in 18 countries and is a Fortune 200 company, based in Federal Way, Washington.

Weyerhaeuser and Denkmann bought a failing lumber mill in 1860. The planing mills and lumber plants grew rapidly, and through various re-organizations eventually became known as the Rock Island Lumber and Manufacturing Company and the Rock Island Sash and Door Works. In 1864, the partnership bought its first lumber property in Wisconsin. From that time on, the firm cut and rafted logs down the Mississippi River. There are famous historical photographs of massive log rafts being pushed down the river by steamboat. It was reported in 1896 that the “F.C.A. Denkmann” steamboat, along with the “H.C. Brockman” bowboat, brought down history’s longest raft, 1,550 feet long by 270 feet wide.

In 1900, Weyerhaeuser and 15 partners purchased 900,000 acres of timberland in Washington State, which at that time was the largest private transaction of property ever in the United States. The local partnership continued until 1905, when Fred, Jr. sawed the last log and the mills went silent. Denkmann died in 1905 and Weyerhaeuser in 1914; both are buried at Chippiannock Cemetery.

Although Frederick and his wife moved with the lumber operations by the turn of the century, daughter Apollonia and her husband, Samuel S. Davis, continued to reside at the family home. They were leaders of industry, society and philanthropy in Rock Island for many years. The home stayed in the family for 85 years. It was donated to Augustana College in 1954.

It was 1865 when Frederick Weyerhaeuser purchased a two-story brick home with a square cupola at the former Conet Place. The farmhouse house was rebuilt in 1882-83, when the west entrance hall, additional rooms, bathrooms and a third floor were added. The third floor featured a wood shingle, mansard roof with a tower room over the main entrance. The third floor also contained a large tank that supplied water for the entire house. In 1888 the dining room was enlarged and rebuilt. It was at this time that the elaborate woodwork, carvings and LaFarge stained glass window above the fireplace were added. According to Frederick E. Weyerhaeuser II, “A great amount of labor was employed on this room, partly to give work to some of Father’s employees.” This home is the most elaborate example of French Second Empire style architecture in Rock Island.