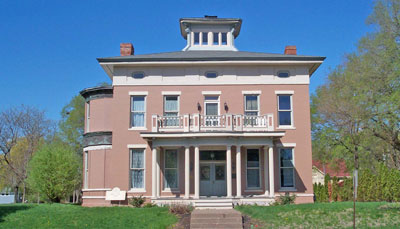 
Only remaining belvedere in Rock Island.

Charles Harrison Case built this home in 1868. Case was one of the earliest settlers of Rock Island, having arrived here around 1829. After only three years of living in the house, Case died. His wife, Margaret, and their children inherited the house. Margaret remained here for several years, finally selling in 1885 to Ben Harper, owner of The Harper House Hotel. Harper sold the house to Ella, Mr. Phil Mitchell’s wife, in 1886 for $9,000. Phil Mitchell was a prominent businessman and president of two banks and the Rock Island Plow Company. The Mitchell family owned the home until the early 1930s, during which time they made many changes to the house including the two-story rear addition, an enlarged front porch, the two-story semicircular bay to the south, and the conservatory addition.

After the Mitchells left the house its condition began to deteriorate. By 1940, the house had been divided into 14 apartments in which World War II arsenal workers lived. By the late 1980s, the house was in very desperate condition and on the city’s demolition list. The current owners have made major progress in restoring this mansion, including restoration of the front porch, and have been able to incorporate new types of insulation and a state-of-the-art geothermal climate-control system.

The Case-Mitchell House is Italianate in style with an exceptional belvedere and kneehole windows. It has very large one over one windows with straight stone headers. The two story bay has a course of unusual rough stone finish and copper friezes with ornate swag detailing. The low-pitched hip roof is a classic Italianate design. This belvedere is the only one that currently exists in Rock Island.