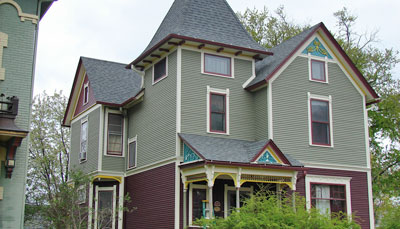 This simple Queen Anne style home was built in 1894 for Thomas M. Cook, a conductor for the Central, Burlington & Quincy Railroad. It was constructed by Collins Brothers for a cost of $3,200. Cook lived here only three years before selling the house to Reverend Robert G. Pearce, who was a Scottish immigrant.

Reverend Pearce united 1500 couples in marriage in his first 60 years of ministry. He became a pastor at the First Methodist Church in Rock Island in 1883, then left, only to return to the city in 1898 after retiring from the ministry, which is when he and wife Esther purchased this house. Rev. Pearce also served as deputy collector of customs for the federal government in Rock Island.

The house has original wood clapboard and an uncommon square tower with an original iron finial and bellcast roof. The porch frieze also displays some of the delicate spindlework common on many Queen Anne style homes. The applied ornament on the porch gable is original.