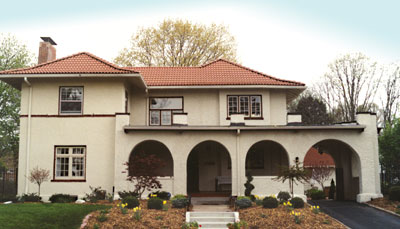 Stauduhar, George P. and others

This land was granted to George Davenport and Russell Farnham in 1829, but 66 years and several owners later it was finally developed by attorney Frank Kelly. The building of homes started immediately in the summer of 1895 with the Kelly House at 1703 20th Street, the Stauduhar House at 1608 21st Street and the first John Looney House at 1635 20th Street. The streets were paved, beginning in 1900. Highland Park is still known for its beautiful brick streets. The final home in the neighborhood was built in 1940, although construction mostly spanned the period from 1895 to 1928. The east side of the district is dominated by Reservoir Park.

Highland Park contains a broad array of architectural styles, especially the Revivals, which were fashionable in the first quarter of the 20th century. Frank Kelly and John Looney built Queen Anne homes, although Kelly’s was a delicate froth of finishes, while Looney’s was a brooding, stone mansion. Kelly and the notorious gangster John Looney were law partners for a time. Looney, who ran prostitution, gambling and illegal liquor in Rock Island for more than 20 years, was certainly the most infamous of Highland Park’s past residents. Looney’s Roost, the small stucco bungalow which housed his scandalous rag sheet, The Rock Island News, is located in the district at 2012 16th Avenue. To learn more about Looney, you can download a short brochure of sites associated with him or link to information on Looney’s Bel Air House.

Architect George Stauduhar’s home is a romantic mix. Six homes in the Highland Park Historic District are attributed to Stauduhar. This prolific architect has archives at the University of Illinois and counts more than 200 Roman Catholic churches in the Upper Midwest among his commissions.

Another significant home in the district is the George Wagner House at 1720 22nd Street. This Spanish Colonial Revival home was built in 1911, features an interior courtyard, and is the most high style example of this architecture in the city. The picturesque English Cottage home at 1702 21st Street is also well known in the community. And, of course, the Revivals can’t be missed.

Highland Park Historic District is the only neighborhood in Rock Island accorded the same historic status as Rock Island Landmarks. These properties are protected by the Rock Island Preservation Ordinance and alteration to the exterior of the properties must receive a Certificate of Appropriateness.