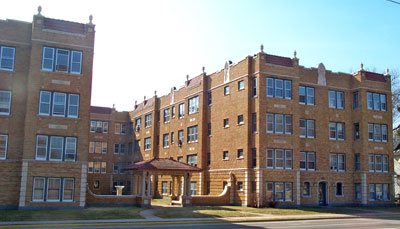 Longview Apartments stands directly south of Long View Park. At the crest of the hill leading to the Mississippi River, the upper floors of these apartments certainly do have a view. Originally the main building contained 34 apartments and cost $250,000 to build. The building was converted to condominiums in the 1980s.

This is the only apartment building of this type in Rock Island, where the freestanding building surrounds a courtyard. The Classical Revival influences include the Greek urns at the top cornice, Ionic and Corinthian columns, along with Palladian-shaped terra cotta work that hints at classicism. The face brick is from the Streeter brickyard and is wire cut. The garage structure was added in 1929, along with six more apartments.

These luxury apartments were designed by Chicago architect Erich J. Patelski. They were built by Sam Weisman, who was a very prominent builder in Rock Island. Mr. Weisman, originally from Germany, arrived penniless in Rock Island around 1912, but quickly gained a reputation as a quality contractor. He is responsible for many well-known Rock Island buildings and subdivisions of the 1920s and 1930s, including: Centennial Bridge Commission Building, Weisman Apartments (13th Avenue & 20th Street), Fluegel Apartments (1536 21st Avenue) and Weisman’s Subdivision and Wheelan’s Addition in the 2900 block and 2400 block of 21st Avenue, respectively.