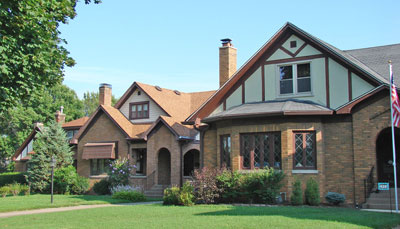 
Intact collection of Chicago-style bungalows with brick and stucco finishes

The Sam Weisman's Addition is located on the north side of the 2900 block of 21st Avenue. Compared to other communities, bungalows are less represented stylistically, and this small plat of seven houses is one of three such strings of south facing bungalows in the city. However, these are the largest, with the others being located in Wheelan's Addition and Washington Park Addition. Six of the bungalows in this grouping face south along 21st Avenue, and a seventh, 2041 29th Street, is placed north of the other houses.

Developer and builder Sam Weisman (1888-1948), filed this plat on October 15, 1930. Weisman was a prominent leader of Rock Island's large Jewish community and a noted local house and apartment builder. Weisman came to Rock Island in 1912 or 1913 and gradually built up a trade by remodeling older business buildings. Beginning in the late 1920s, he began building Longview Apartments (1928-29) and Weisman's and Brady's Additions. Weisman lost many of his properties during the early years of the Depression, but recovered with buildings like Weisman's Apartment (1948) at 20th Street and 13th Avenue and the Centennial Bridge Commission Building (1941).

The homes were mainly built from east to west, with 2923 21st Avenue constructed first. The houses are staggered along 21st Avenue, which runs southeast on an angle. The houses are located on narrow lots with large front yards, and the owners had to negotiate long narrow side driveways because there was no alley access except for 2923. Each of the homes also has a detached two-car brick garage.

The houses have very similar interior plans, with 2923 as a mirror image to the others, perhaps because of its location next to 29 1/2 Street. The fronts and porches differ in form, with the architectural design employing varied brick colors and window treatments. However, all have wire cut brick and colored mortar. The ground floors are all veneered in brick, and the upper floors are stucco with half timbering. A special feature is the use of clear art glass in the primary west facing window openings. Some have gold accents. Each house has a prominent chimney, located in the front corner, along with large gables and all but one has a side facing gable roof. The two easternmost houses have front terraces, while the others feature concrete and brick partially enclosed porches. Stonework is limited to the chimney shoulders. Some of the houses have matching small windows flanking the chimney.