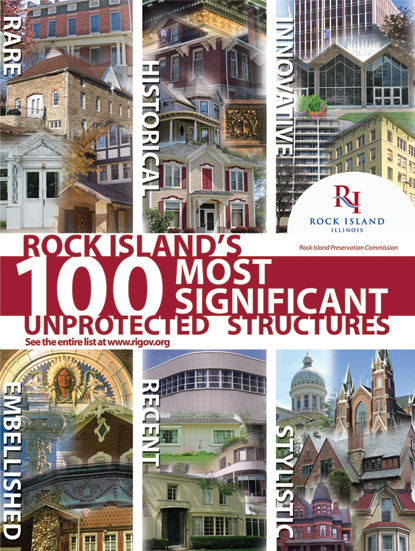 Since 1984, the Rock Island Preservation Commission has been protecting Rock Island’s important historical and architectural buildings through their designation as Rock Island Landmarks. A 1988 study, called the Significant Structures List, determined the most notable historic architecture in Rock Island, and served as a guide to buildings worthy of landmark nomination. But within 20 years, 52% of those initially identified 115 buildings had been protected as landmarks, were National Register-listed or demolished. In addition, a few had their most outstanding features obliterated by modern alterations. The Preservation Commission determined it was time to revisit the Significant Structures List, adding buildings of known historical importance, plus including buildings from the 1940s and 1950s, since the traditionally accepted term for “historic” is 50 years.

In 2009, the Rock Island Preservation Commission unveiled an updated list of Rock Island’s 100 Most Significant Unprotected Structures. The word “unprotected” was added so as to not diminish the value of the already designated and exceptional Rock Island Landmark and Highland Park Historic District properties. National Register-listed buildings were intentionally left on the “unprotected” list. It is the Rock Island Preservation Ordinance that provides local design review which protects historic architectural features. A National Register listing is largely honorary, providing protection only when state or federal funds or licensing impacts a historic resource.

Which Buildings Are the 100 Most Significant?

The Most Significant Unprotected Structures, or MoSUS, are representative of the full history of Rock Island, from the 1850s to the 1960s. The list contains a complete range of architecture, from Greek Revival to Modernist. The grandest and most well known of Rock Island’s unprotected buildings are included, such as the Denkmann-Hauberg House (Hauberg Civic Center), Augustana College’s Old Main and the Fort Armstrong Theatre (Circa ’21), along with the best examples of more modest living represented by Folk Victorian and Foursquare architecture and a 1940s gas station.

To be on the MoSUS list, a structure had to be located in Rock Island’s municipal boundaries, constructed in 1960 or earlier, and not designated as a Rock Island Landmark or local historic district or protected by state historic site or national historic landmark designations. Additionally, groups of buildings identified as a single unit through geographic, stylistic or historic relationships were considered. The Preservation Commission selected the 100 buildings based on: 1) integrity of primary structure or district; 2) rarity of architectural style or type with consideration for building age; 3) special decorative or structural features associated with the building or site; and 4) historic associations with important individuals, but building integrity had to be sufficient enough that the historic individual would recognize the structure.

We invite you to view Rock Island’s 100 Most Significant Unprotected Structures through the Rock Island Historic Structures Inventory, where you can sort by type, architectural style, decade of construction and more.

Learn how to nominate a building on the MoSUS list for landmark designation.